Shopping Cart
Your Cart is Empty
Quantity:
Subtotal
Taxes
Shipping
Total
There was an error with PayPalClick here to try again

Thank you for your business!You should be receiving an order confirmation from Paypal shortly.Exit Shopping Cart

We have a great opportunity for you! Let us go by your neighbors and drop off a brochure and business card. We are kind and courteous and will not divolge any information about you contacting us and making the referral. We will give your neighbor an opportunity they can't pass up. Please feel free to contact us for more information on this new polite way of getting the job done.

Dog shot and left for dead

We are completely saddened by the acts that someone could actually raise a gun to a dog and shoot him. Here's a sad but very heart warming story. feel free to donate to help this pup get his surgery. 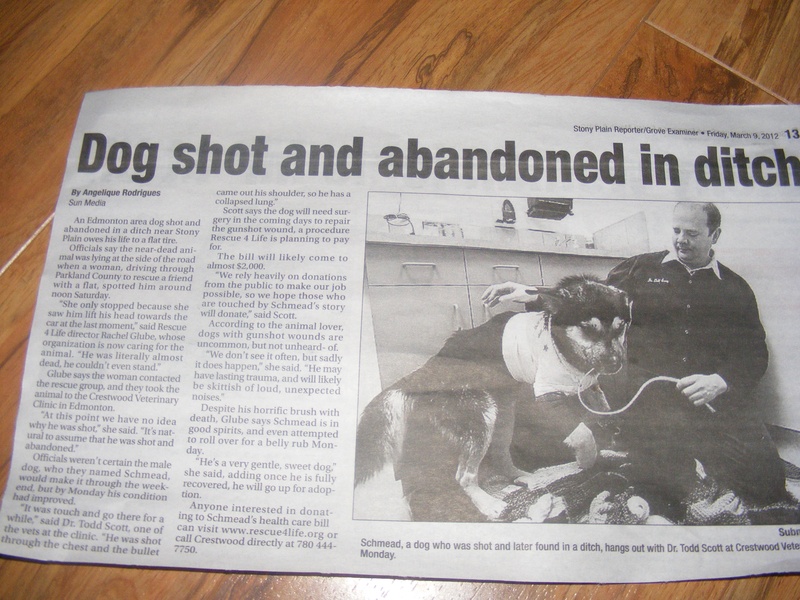 Should owners be walking their tempermental dogs with a muzzle on?

Check out this article below. Another Dog Attack. I think maybe people need to have control of their animals. It seems that those who have dogs with temperments know that they do and should  keep those around them safe. Afterall, it is the pet owners responsibility to control their pets. And I think maybe their should be some kind of 'dog control' class that people can take their dogs too. This should be made manditory for certain breeds where it is in their instinct to attack to protect. What do you think of this article?

If you haven't heard about this already in the Edmonton News about a family husky dog taking the life of an infant. Feel free to post what you feel about this article. I have heard many sides to this story. This is a discussion that should be talked about among the community. 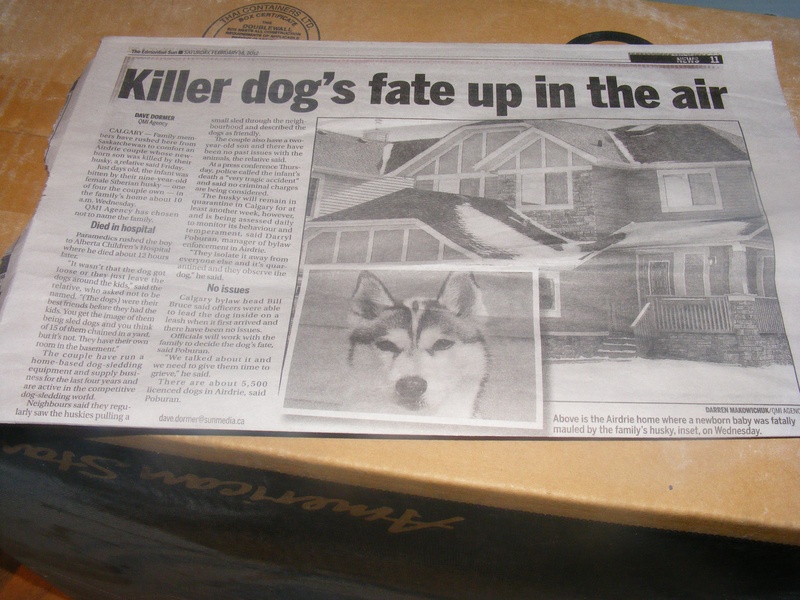 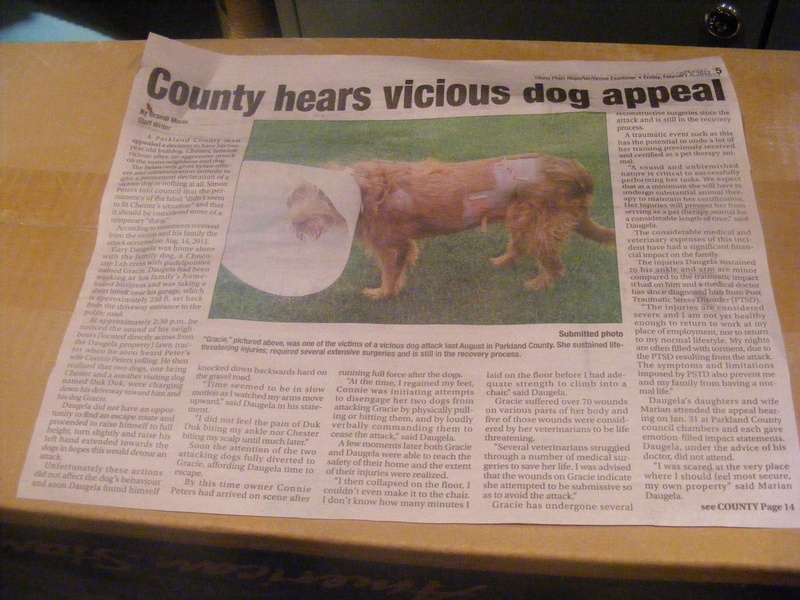 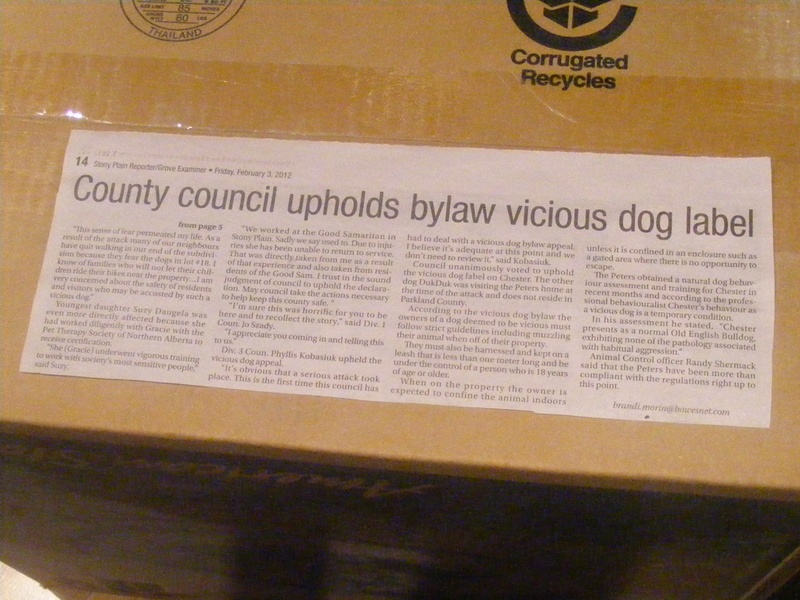 Labrador Retriever or Golden Retriever:  are usually great with kids and pretty smart, but they can be very hyperactive if they do not get enough exercise.

Poodle: Believe it or not, the Poodle is extremely smart and has a great temperament. Plus, you have a size choice – toy, miniature, or standard. Regular grooming is necessary.

Bichon Frise: This little cotton-balls breed loves to play, but is not usually too hyper. It is also a small dog, which is perfect for your little humans. Regular grooming is necessary.

Beagle: These dogs are friendly, clever and not too big, making them very suitable for kids. Though some can be a bit high-strung, they typically respond very well to training.

Cairn Terrier: These active little dogs seem to have a natural affinity for kids. They can keep up with them and tolerate just about anything, but are still gentle.

Collie and Shetland Sheepdog: These are both very calm, gentle and tolerant breeds that often do well with children of all ages and sizes - kind of like Lassie.

German Shepherd Dog: This breed is extremely loyal and protective, but MUST be well-trained. The GSD does have a playful side, especially at younger ages.

Mixed-breed dogs: Mutts are typically well-balanced and intelligent. Overall, they are truly amazing dogs! Plus, you can save a dog from life in a shelter.

This info came from:  http://dogs.about.com/od/dogbreeds/qt/dogsforkids.htm

As the owner and operator of No Time For Poop, I would like for more people to know about the situation out in Hobemma, AB. We are asking that if people want to adopt a dog to check out Sundance Canine Rescue's website. There are going to be so many more dogs coming out of there in need of a good home. I have attached a link for a taste of what is going on out in Hobemma.

I am offering my services at an extreme discount to those who adopt from the Sundance Canine Rescue. I will definitely be requiring proof of adoption.

This is the least I can do to help make things easier for everyone involved with this tragic situation. Let these dogs have a chance.

This is just a video I found randomly. Unfortunately, it is reality for some but for others they just think commenting on the video is hilarious. Too bad!

But anyway, this gives you an idea of the issue out there with stray dogs.

Doggy Daycare at the Humane Society???

We are reaching into the Fall season very quickly. We are offering Fall and Winter Service for our customers. The reason we recommend this service during this time is because it is much more healthier for your pets and yourself come spring time. We are encouraging to have service all year round. If our customers maintain service all year round they will not have to pay for a spring cleanup come spring time. This is a nice benefit to some as it can be very pricey if there are more than two, three, or four dogs. Give us call and try it out. You won't regret it!

Considering the use of biodegradable bags

We have been very environmentally friendly in and around our own house and have decided it would be fantastic to use bio friendly products. We are looking into expanding into using biodegradeable bags for pick up of dog poop.